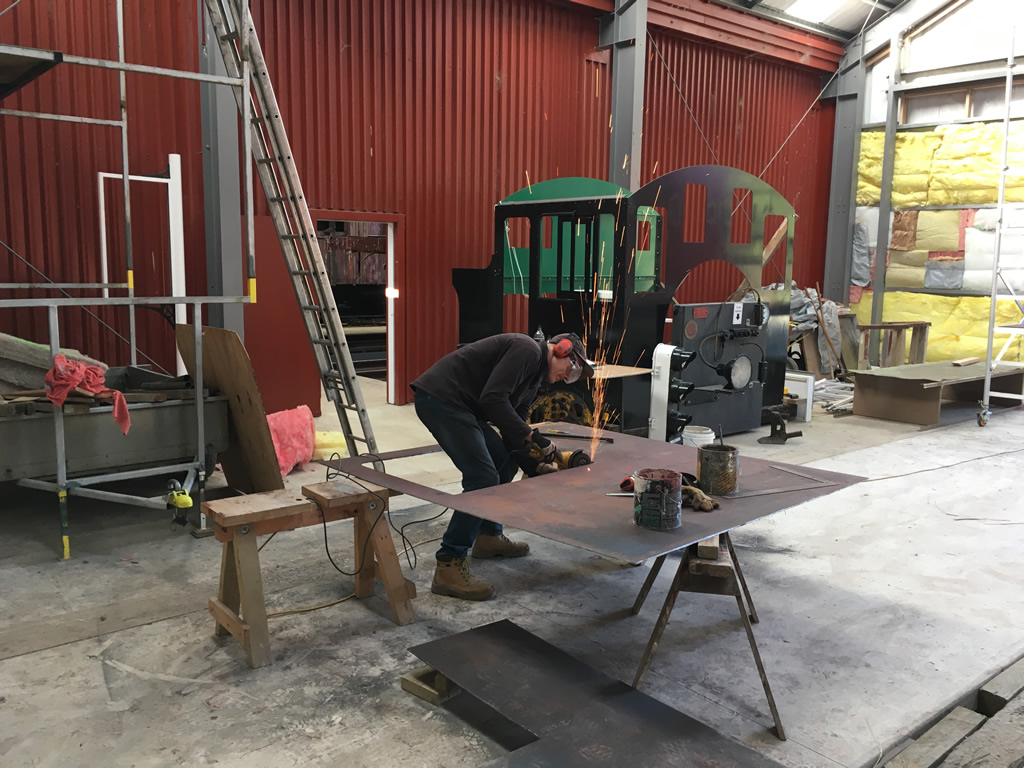 A selection of photos of work in progress around the railway.

We had the Wb cab display at the Upper Hutt Summer Carnival at the end of February 2017, which was lifted in and out by hiab truck. An alternative display was worked up for March Madness. 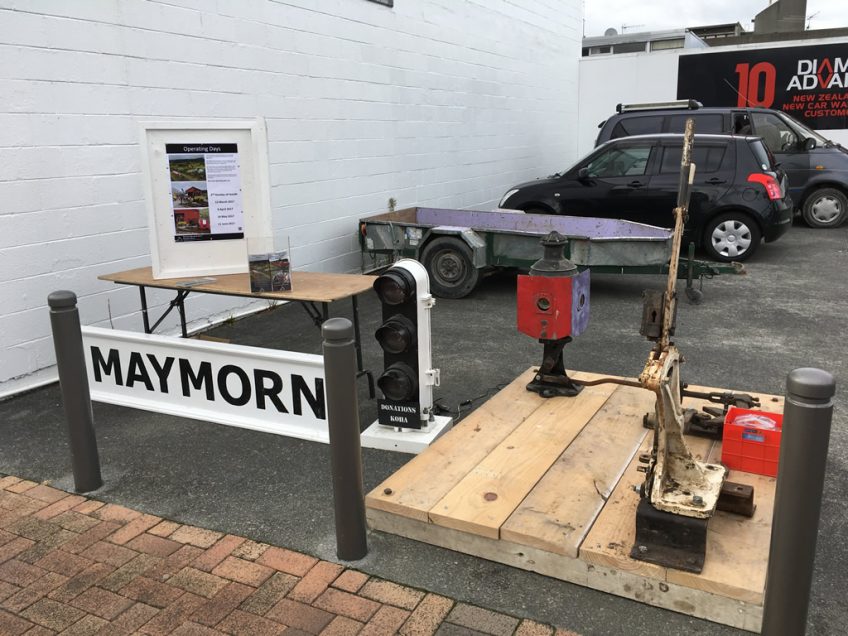 The Trust's display at March Madness, Upper Hutt on 18 March 2017. As a new feature we invited the public to try their hand at signalling, with an interactive display of a switchlock siding mechanism.

A backlog of tasks have been done in recent months, lifting the standard of the railway and finishing off some minor work remaining on some of our track structures. 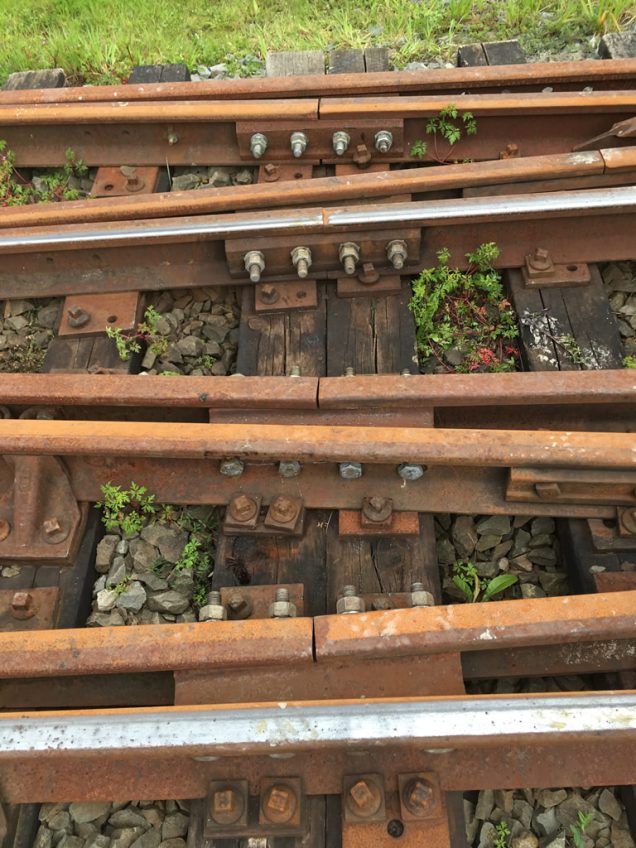 The double slip between mainline and yard now has a full set of heel bolts, securing point blades to their respective stock and closer rails. The shiny pair of rails in the photo is the regularly used route from mainline to yard at Maymorn. 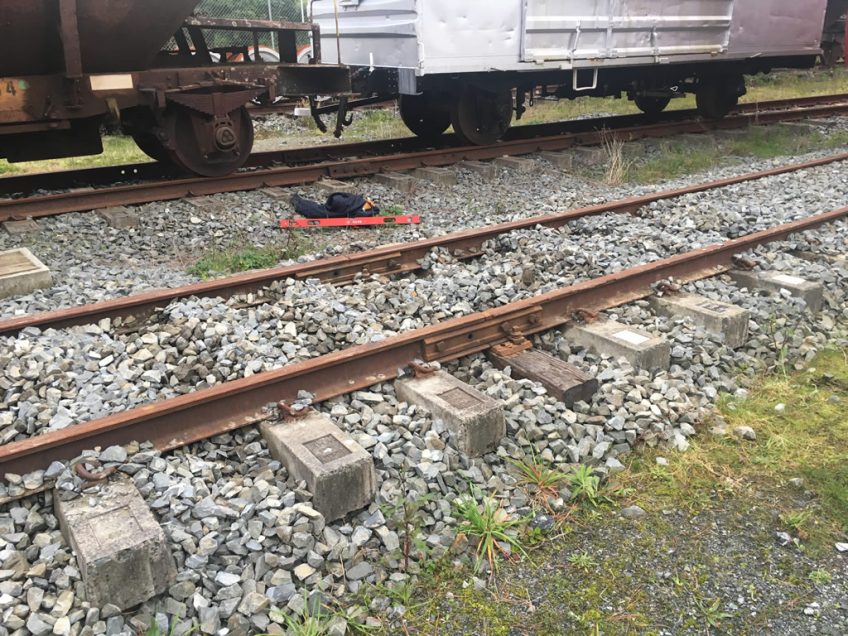 A joint has been lifted and packed in the yard near the rail vehicle shed. 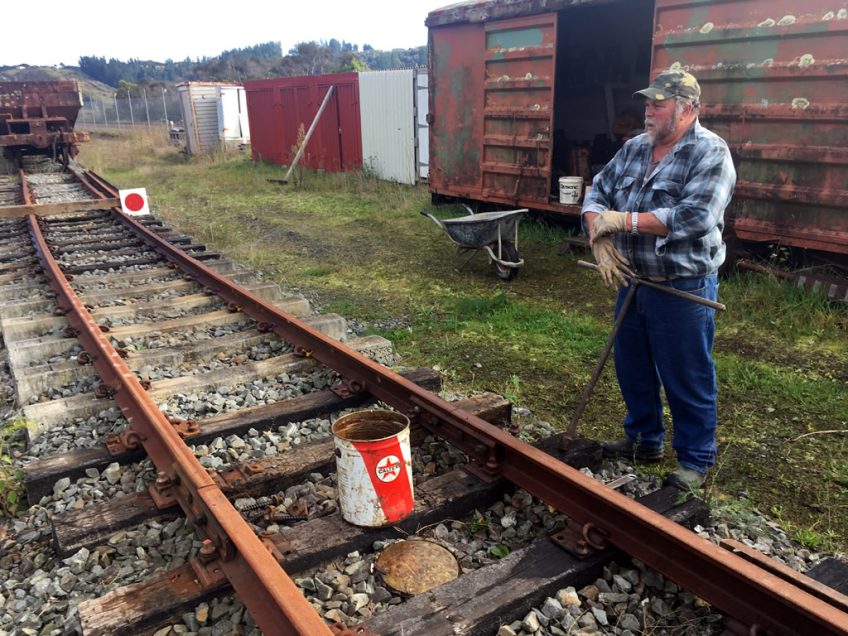 Full set of fish bolts have been fitted to turntable road, and a pair of short rails straightened (near the red disk in the photo). 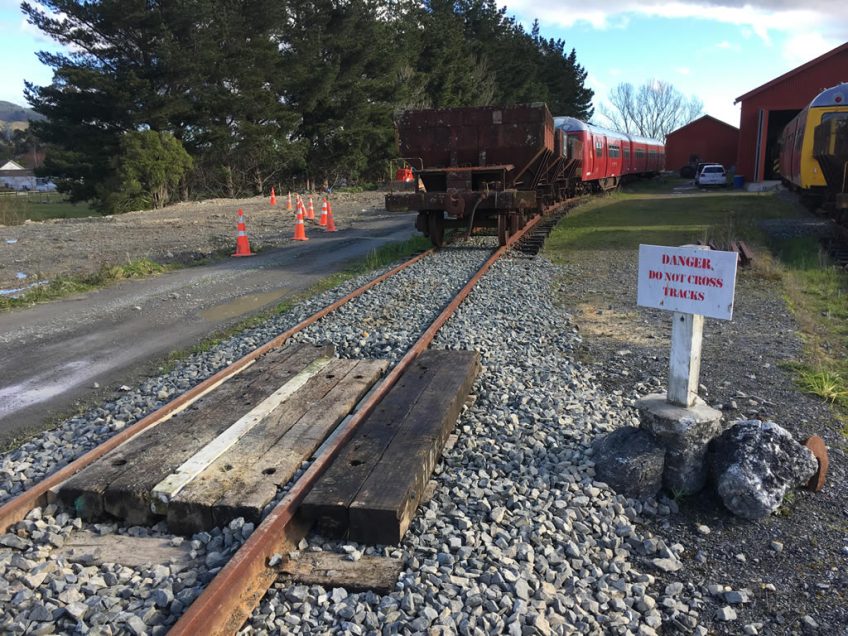 A formed crossing has been built up out of sleepers on road 4, part of public safety improvements at the site.

Concrete floor and steps have been prepared and poured, improving under foot conditions in the rail vehicle shed. Insulation and internal lining work is moving along in the workshop, with half of one end wall nearing completion, and a start made on the ceiling. 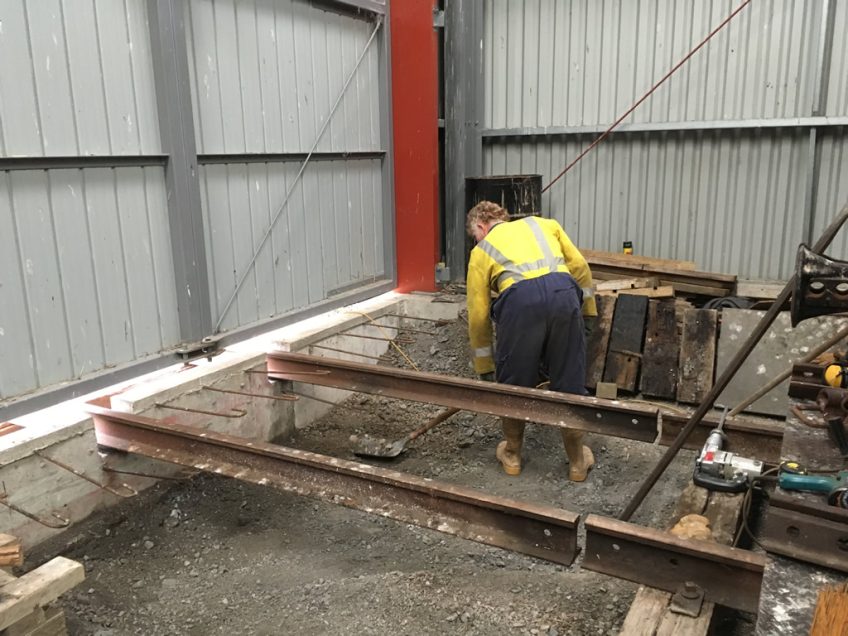 A section of floor has been placed at the Kaitoke end of the shed, cast on top of four rail beams. Excavations for rail beams on road 2 were completed between operating days, down to 550mm below rail top. 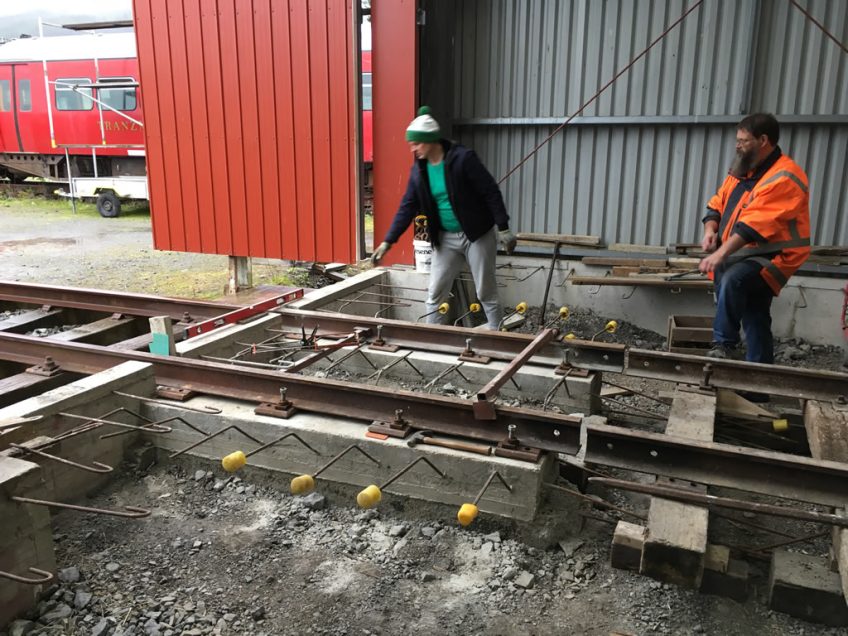 Ray and Glen back filling around rail beams on road 2 in August 2016. Rails are fastened to threaded rod studs epoxied into holes drilled into the concrete. 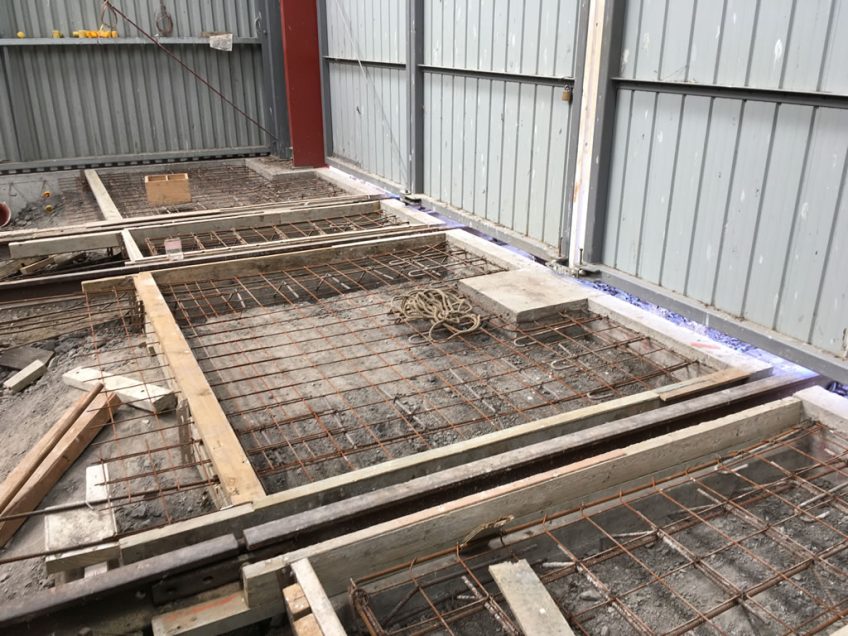 Form work in place for floor slabs at Kaitoke end of the shed in December 2016. Reinforcing extends past the current set of slabs to allow for future floor and pit extensions. 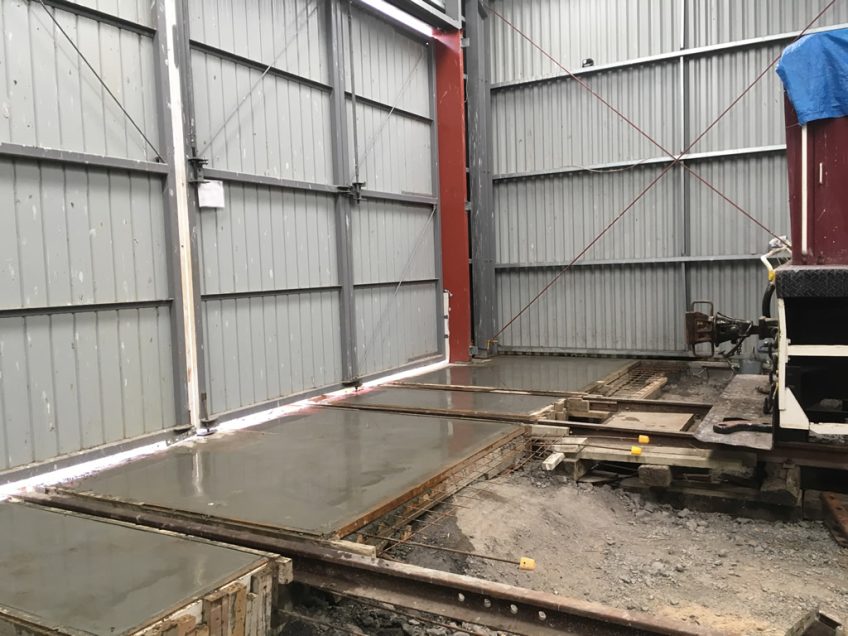 Concrete floor slabs cast and finished off on 14 January 2017. Door latch mechanisms had been fitted to road two, consisting of a set of rods engaging with plates bolted to the top of the door frame, and lock-boxes at the mid-point of each train door. 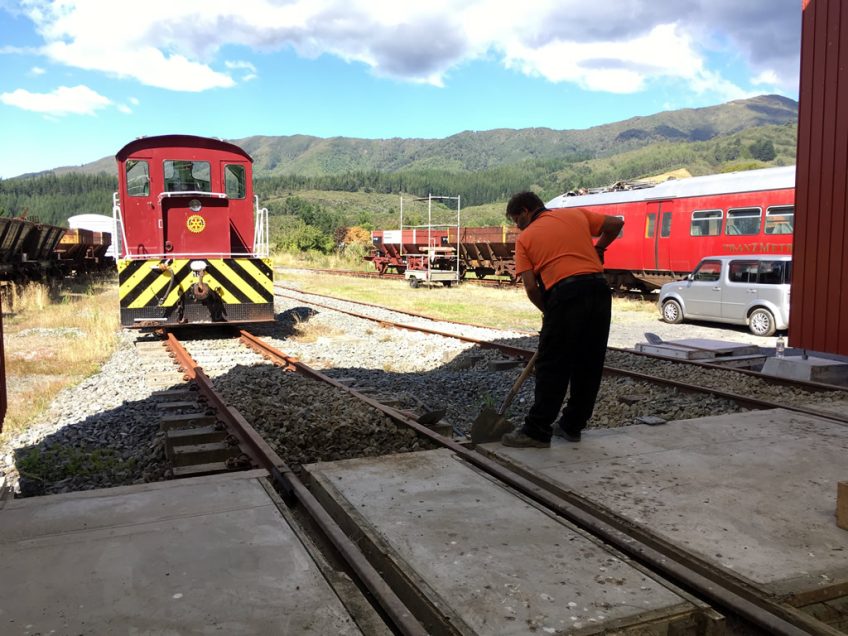 Ray tidying up ballast on shed road 1 on 11 February 2017, showing the improvements made at the Kaitoke end of the shed. 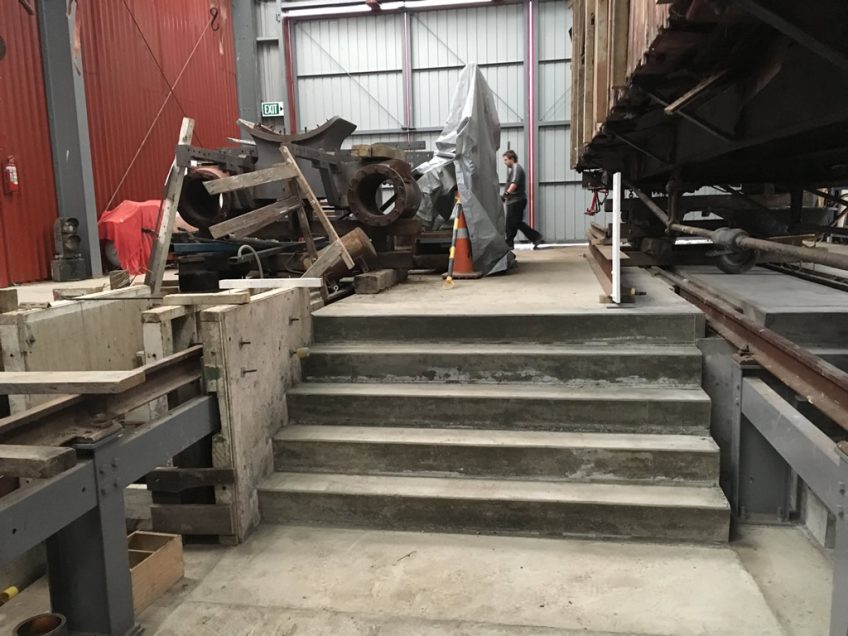 Concrete steps leading into the inspection pits at Upper Hutt end of the shed, which were completed in October 2016. 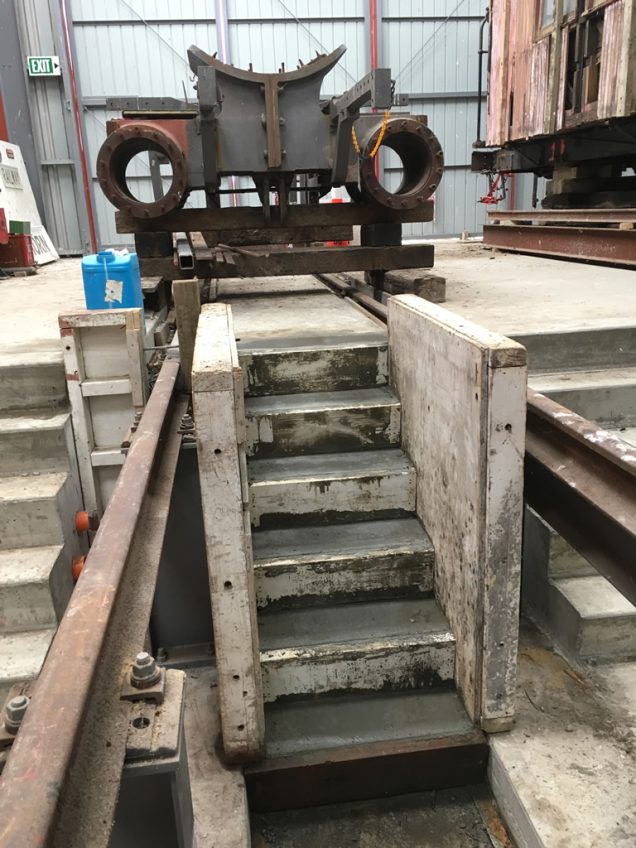 A set of steps were poured between the rails on road 2 on 14 January 2017, along with short lengths of pit end walls, completing the steps and wall arrangements at the Upper Hutt end of the shed. 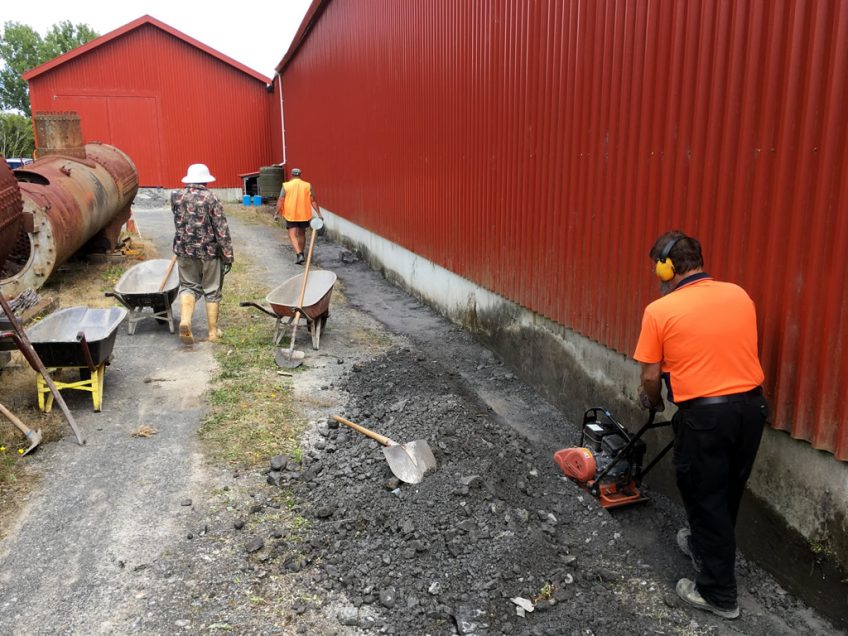 Over summer 2016/2017 we back filled foundations along the south side of the shed. More fill is needed to lift to final height, made easier by the relocation of the boilers seen to the left of the photo. 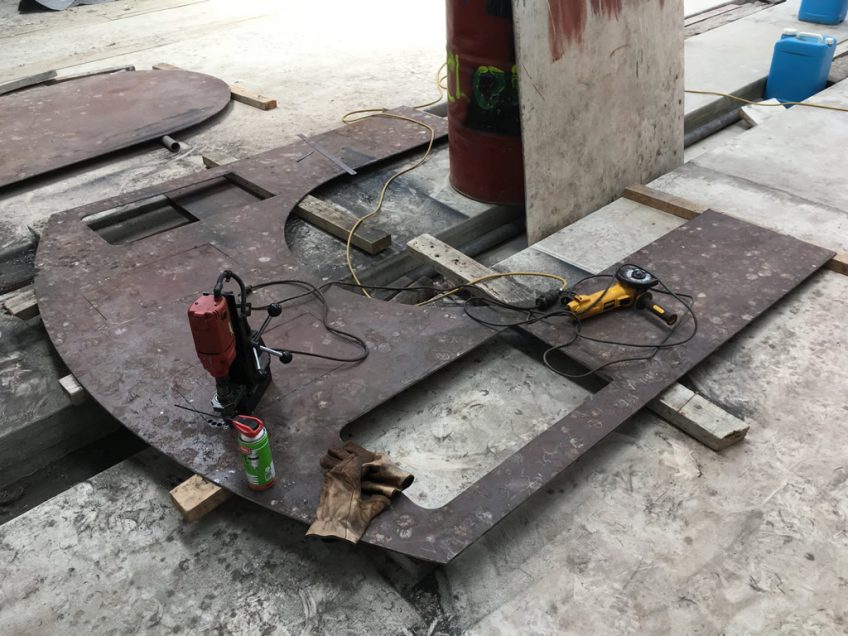 The cab front has been cut out for 292, including the large radius roof and the firebox cut-out. All four windows are also done. Next in line are the cab sides, which will be fitted up to the cab front, fastening to steel angles in each corner. 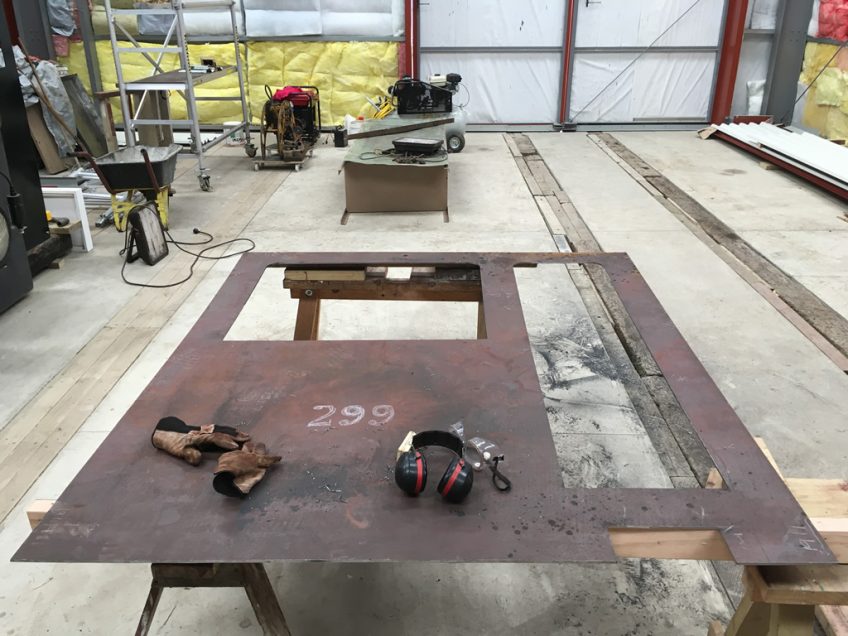 Fireman's cab side for Wb 299, showing side window, door and footstep all cut out.

The lining work inside the workshop has moved along during winter and spring 2017. A modest amount of ColorSteel cladding was ordered to continue the work, opting for a lighter "Titania" colour to keep the workshop interior reasonably light. There is a lot of fitting up and flashing work to do, but good progress has been made in the past few weeks.

We welcome contributions towards this work, and are seeking funding to help purchase the next orders of cladding. 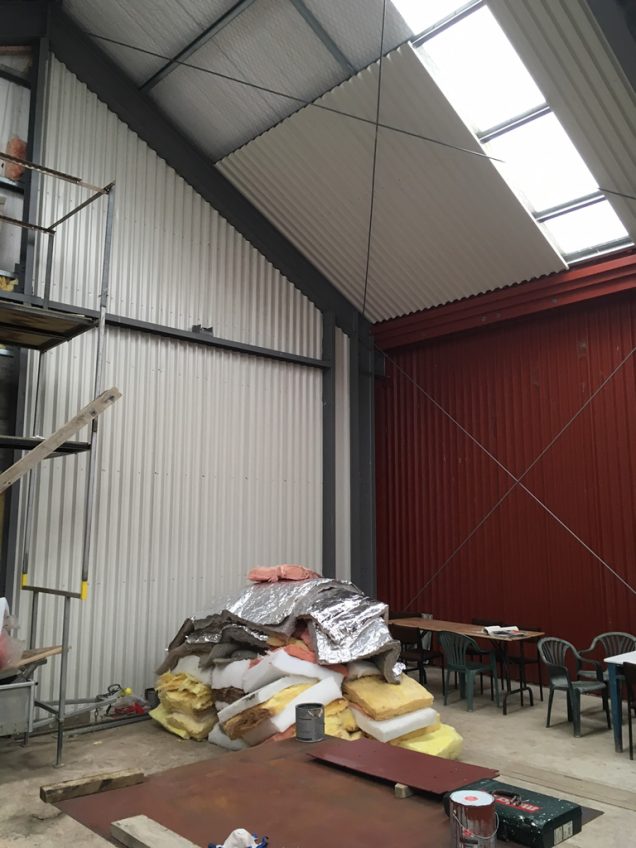 ColorSteel lining on half of an end wall, and ceiling of workshop, progress as at 4 November 2017. Centre-stage is another pile of insulation ready to head into the walls and ceiling cavities.