Diagram of original style of Fell incline permanent way, illustrating method of elevating and supporting centre-rail, and bracing against the predominant direction of traction and braking forces.

The Fell centre-rail system owes its origins to an English engineer, John Barraclough Fell, who was inspied by the possibilities offered by the Mont Cenis Pass to provide a direct international railway route between France and Italy. In 1863 a patent was granted for a system whereby a pair of horizontal driving wheels applyed traction forces to a centre-rail, a significant advance over previous designs of centre-rail use.

Applications of the Fell patent

The first practical application of the Fell patent was opened in 1866, providing a temporary Mont Cenis Pass route whilst the Mont Cenis tunnel was bored. This was to last but 3 years, however, as significant advances in tunnel boring techniques expedited completion of the 8½ mile (13.6 kilometre) long tunnel. Importantly the Mont Cenis Railway proved the patented system in commercial application, paving the way for further use elsewhere.

The Cantagallo Railway was opened next, one of many routes connecting the Brazilian hinterland with capital Rio de Janeiro. Four Fell-equipped locomotives were delivered in 1872 but were superceeded by conventional locomotives in 1883. The Fell centre-rail continued in use for braking of descending trains, in similar fashion to a good number of other inclines in the world, until the 1960's.

Two practical alternatives for the descent from Summit to the Wairarapa Plains. One, termed the 'Parliamentary Line' involved a tortuous descent following mountainous ridges at conventional railway gradients, finally reaching the Wairarapa Plains close to Lucena's Creek [refer to Cross Creek to Pigeon Bush route for locality information]. Curvature was at 3 chains (60 metres) radius was tighter than the usual 5 chains (100 metres) minimum and terrain steep and unstable. Specialised locomotives and rolling stock would have been required to operate the route. All these factors counted against the option.

A second option was to take a more direct route to descend to the Wairarapa Plains. This required substantially less route mileage and earthworks, could be achieved within the usual 5 chains (100 metres) minimum radius. It did however require a descending gradient of 1 in 15, far steeper than the normal maximum gradient of 1 in 35. The Fell patented centre-rail system had been proven at Mont Cenis, whereas alternative systems such as the Riggenbach or Abt rack-and-pillion, which were to soon to be in widespread use, had yet to be proven. The proven Fell system was selected, and four Fell-equipped locomotives ordered in 1874 from Avonside Engine Company, Bristol, England, along with the requisite centre-rail materials. 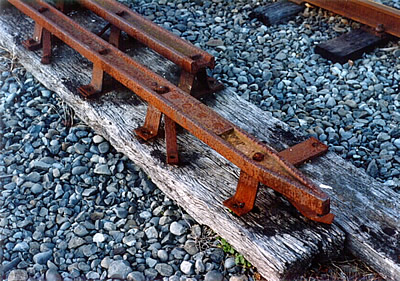 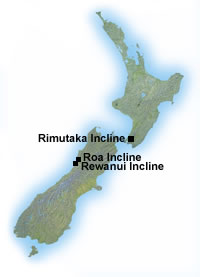